I love to narrate my experiences. The best part of it is there is no research required. You just continue to write the events as they have unfolded & put in your emotions as you’ve felt at that time. You can read my past experiences on WordCamp Mumbai, WordCamp Udaipur, WordCamp Nashik & WordCamp Singapore.

But this one is not about WordCamps. It’s about PressNomics. PressNomics is a 3-day event for enterpreneurs in WordPress to collaborate, learn & relax. The event is hosted by Pagely and supported by commercial entities in the WordPress ecosystem. This was the 5th edition of the conference.

Before I even begin, I would like to thank Josh, Sally & the entire Pagely team for organizing this unique conference.

I truly regret I didn’t attend PressNomics 1 to 4. So this is how it went..

PressNomics 5 would easily have been the event that I never went to. I had been pushed to go there by a few people. Rahul from rtCamp, Nirav from StoreApps, my team & my wife, Riddhi.

The final push came from Riddhi barely a week before the event. And I was onto a flight that would throw me away from one timezone to another like a football. From Mumbai to Hongkong, Hongkong to LA & LA to Phoenix.

I didn’t even care to count how much total hours I spent in the flight. I know I reached Phoenix on April 5 around noon. And I also came back the same route!

I was accompanied here with David Katzner, who is a friend of mine since 2005. He has seen me go from being single to having girlfriends to getting married & now a Dad!

David has just joined our team as the Marketing Director & will be primarily dealing with our pre-sales support & shaping new partnerships in US. He also runs a non-profit, The National Parenting Center, founded in 1989.

Me & David were literally wondering after reaching the venue. I couldn’t see any familiar faces. Finally we decided the best way to break the ice was to join someone on their table.

The first person we met was Seth Shoultes from Event Espresso. Since we have a Booking & Appointment Plugin for WooCommerce, I knew about Event Espresso & what they are doing. But didn’t expect Seth to be present there nor had we planned to meet him.

It was wonderful talking to him & learning about what all they have done so far. Especially interesting was to know that since we both are serving customers who are in the Bookings space, we could exchange ideas & partner in multiple ways.

Then we bumped into Rod Austin. He is a Digital Strategist at Pagely. We actually had a long chat with him, ranging from family to his role at Pagely to our work.

We owe Rod a drink for when we meet next! He was kind enough to buy David a drink when the coupons were over. (thanks Rod)

On the 1st day, when we reached the hotel, it felt as if our bags were too small to carry all the swag. It was ALL OVER THE PLACE. Tshirts, Webcam Covers, Jackets – there were just too many of them.

One of the many people I met was Shawn Hesketh. He is the creator of WP101. As they say, it’s a place where beginners learn how to use WordPress.

At times, we do hire people at Tyche Softwares who are not fully familiar about WordPress. WP101.com is the starting point for all such people. Even if someone knows WordPress, we still ensure they go through the videos on WP101.

I was delighted to meet him. And possibly we might as well work together on some video tutorials for our WooCommerce plugins. Shawn was equally pleased to hear about how we are using WP101.

Before going to PN5, I had asked a few people for recommendations on whom I should be meeting. The people who I asked were Mario Peshev & Jean Galea mainly.

Jean recommended me to meet Zack Katz. So my eyes were constantly around badges of people!

I spotted Zack sometime during one of the sessions. The first thing I noticed about him? He is TALL.

Zack runs GravityView. It’s a plugin that displays Gravity Form entries on the frontend. We had a discussion that revolved around different pricing methods, about our teams & stuff like that. Certainly many points to ponder for us & he had a few takeaways as well with regards to our branding.

Another chance meeting was that with Brent Shepherd from Prospress Inc.

They are the creators of the very popular WooCommerce Subscriptions plugin & the WooCommerce One Page Checkout plugin.

Coincidentally, we have a lot of opportunities to work together. And in the case of our Order Delivery Date Plugin, we have already made it compatible with WooCommerce Subscriptions plugin a few months ago. The idea is to follow the same path for our other plugins as well.

They had this Kings Corners at PN5. As you see, those were the Kings in the picture below. Me & David decided to split up. He went to the Marketing/Positioning corner with Chris Lema whereas I went to the Business corner with John Eckman.

"Customer service is great, they go above and beyond to assist and corrected any issues I had with setting everything up in a timely manner. I use the abandoned cart plugin and am very satisfied with the results and carts recovered." - Bran Weintraub

There were so many learnings from those 2 sessions. It’s hard to write all of them here. To summarize, one takeaway from Chris’s session was how to make best use of Testimonials on your website. John’s session had many useful tips for project estimation & how to take the sales to the next level for product companies.

After the talk with John, I met Marco. He was actually sitting right with me in the Kings Corner talk.

He is a Community Manager at SiteGround. He is a Digital Nomad in the making.

He had quite a few tips with regards to Marketing & some stuff they are doing at SiteGround. Ofcourse, he did try to convince me to move to SiteGround for hosting.

We did have a wonderful Speaker/Sponsor dinner at the end of Day 1. But it was a super-exhausting day. Particularly since I was still carrying my jetlag from the crazy travel.

Fortunately, there were a few people whom I had met earlier. Devin was one of those. I had met Devin in India back in January 2017 at WordCamp Udaipur.

Devin is the Founder of WordImpress & GiveWP. They have some wonderful products.

I was able to share with him my plans for 2017 without hesitation. It was great to hear some of the stuff they’re doing with GiveWP & their plans as well.

I also got to meet Matt from their team. He is Head Of Support & Co-Author of GiveWP plugin. He is also the admin of Advanced WordPress facebook group, which is one of the largest ones out there.

This was one of the best moments of the conference for me. Talking to Chris Lema & me & David having a few minutes with him.

I’ve appreciated him from 3 years back, when he used to write one post per day. In one of those days in November 2013, he also wrote a review of our Booking & Appointment Plugin for WooCommerce.

After that, I literally had people asking me “Hey, how did you get Chris to write a review?“. The fact is that I did ask him a few months ago about writing a review for our plugin. He politely replied that he would take up when he thinks is the right time. And that he doesn’t do paid reviews.

I was happy that Chris did remember us. When I mentioned “Tyche Softwares” to him, he replied..“Ah, Bookings?”.

Apart from discussing about what we are doing currently, Chris mentioned his interest in coming to India for a few WordCamps in 2018. Along with Shawn, he mentioned about coming during a period where they could witness a couple of WordCamps & share their experiences & learnings with the WordPress India community. I hope that does happen in 2018! 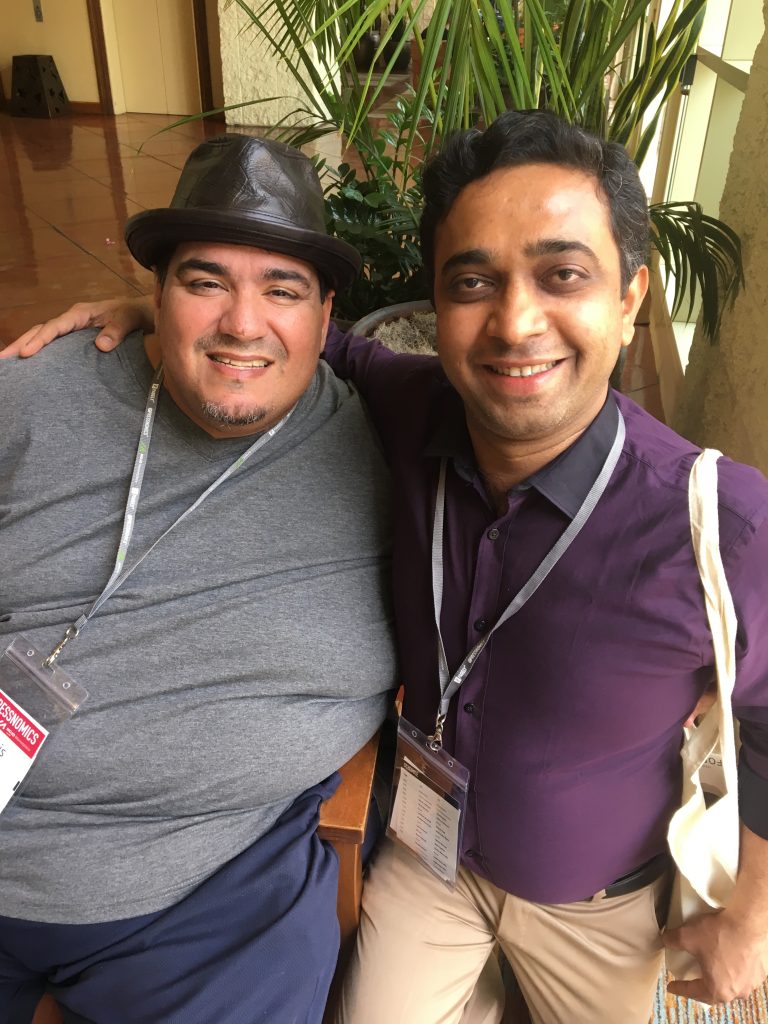 We were 6 of us traveling from India for PN5. I was meeting Akshat & Karan for the first time. Although I have seen Karthik speak at earlier WordCamps, it was the first time meeting him as well.

Akshat is the founder of BlogVault – a backup solution for WordPress. I haven’t got a chance to use it yet, but I heard only good things about it from people at the event, including Chris Lema.

Karan runs a WordPress Services Agency named PixelMattic, based out of Bangalore. He has Sandeep Kelvadi as his Co-Founder. Although Sandeep wasn’t there at PressNomics, but I did get a chance to meet him at WordCamp Nashik.

Karthik wears multiple hats. He is the CEO of HummingBird Web Solutions Pvt Ltd. He also runs a Deals venture, a Magento services company & WPEka – among other things.

He is well known in the WordPress India community for giving talks that hit the right chord with the audience.

Below is a random picture from one of the places in Tempe, as it is fondly called “The College Town”. And everyone at PressNomics did witness that, with the town still full of buzz past midnight.

At the dinner on 2nd day, I had a chance to meet Andrew Roberts. We had a detailed conversation on Branding, Products & Marketing. He is the Founder & CEO at Ephox, makers of TinyMCE. I didn’t expect the discussion to be so long & helpful in the 1st conversation, but that’s what happens at PressNomics! YOU MEET AWESOME PEOPLE.

I also met Tim Cimbura, the magician. Ah well, he doesn’t mention that on his bio anywhere, but he showed some cool magic tricks to us during the dinner. He is an Apple Expert, works with FileMaker & WordPress.

This day had the Golf & Dare To Escape activities planned for a limited number of people. Since me & David booked our tickets to the event quite late, we were unable to participate there.

We had a walk around the town, found this nice place called Postino where we had this Bruschetta Wild.

There are a lot of other people too whom I met. They were Primož, Lindsey, Scott, Adam Silver, Luca, Adam Warner, Dejan, Tina, Katya, Dwayne, Brian Krogsgard & others.

Once again, I would like to thank the folks at Pagely for organizing this wonderful event.

I didn’t feel like I was attending for the first time. The organizers & attendees there didn’t make me feel so.

I met 90% of them for the 1st time, but everyone was welcoming, warm & eager to talk. That’s what makes me comfortable. I was able to create a conversation with everyone.

I am looking forward to PressNomics 6 already!

Some other PressNomics stories:

This site uses Akismet to reduce spam. Learn how your comment data is processed.

Sign up here to get the latest news, updates and special offers delivered directly to your inbox!