In any e-commerce website, the merchants happen to face the issue of carts becoming abandoned. There are various reasons behind it, which we will study in detail in our next post. So let us first understand how to capture WooCommerce Abandoned Carts with Abandoned Cart Pro for WooCommerce plugin.

As we have seen in our earlier post that an Abandoned Cart is created when the user visits the site, add items to the cart but for some reason does not make any purchase. Hence the cart is not converted to a successful order.

But for the cart to become abandoned, there is a criteria provided in Abandoned Cart Pro for WooCommerce plugin which is referred to as ‘cut-off time’. So a cart can be abandoned only if the cut off time has been set in the field ‘Cart abandoned cut-off time‘ under the Settings tab.

What is the cut-off time and how does it work?

For instance, a customer comes to the site to purchase a bag, he looks around in different subcategories of the bag and likes one item, hence he adds it to the cart. It is very likely that the customer will still check other items to find anything better in store, thus the search still continues. Also, there could be a possibility that the customer is comparing items and prices with other sites, thus he is spending some time for these activities.

So the cut off time is referred to as a limit which will identify that if after X minutes the cart is not purchased, then it will be considered as abandoned. If the time spent on customer’s searching activity until the purchase is made, exceeds the cut-off time which is set by the admin (in minutes), then the cart is captured as Abandoned Cart.

As per the above example, when the order in the cart is not purchased within 60 minutes, the cart is considered as abandoned because the time is set as ’10 minutes’ in the ‘Cart abandoned cut-off time’ field for logged-in users and guest users (non logged-in user).

When the plugin is installed on the store, there is a default setting for the cut-off time which is set to ’10 minutes’ for both the users as shown in the above example. This can be changed by the admin as per the requirements.

The provision for setting two separate cut-off times for different users is mainly because sometimes if the store admin wants the guest cart to be captured earlier than the logged-in user cart then these different settings can play an important role.

To understand this better let’s take an instance, consider an admin thinks that if he can capture maximum abandoned carts of guest users coming to the store then probably he can increase the conversion rate of visitors to buyers, as most customers prefer to have a guest checkout than going through the entire sign-in procedure.

Once the cart is abandoned, it will be displayed in the Abandoned Orders tab with all the details as shown below: 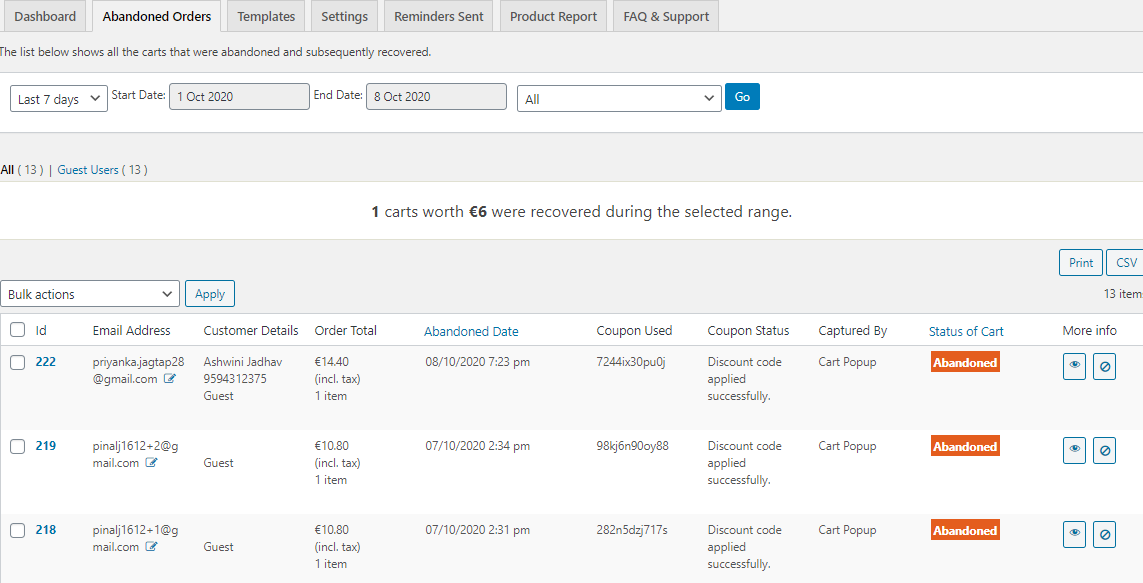 Here we display details of the customer like his name, phone number, user type, and email address. Order details like order total, the quantity of the items, abandoned date and time, coupon code used and its status, where the email address was captured, and the status of the cart. There are ‘View’ and ‘Unsubscribe’ buttons where admin can have a complete overview of the order at a glance and also, can unsubscribe the user carts to avoid sending the reminder email. Details on each Abandoned Order List item will be provided in our next post.

Hence capturing of Abandoned Carts using Abandoned Cart Pro for WooCommerce plugin is indeed a boon for the online merchants who have to deal with scenarios where thousands of customers leave the store without any purchase making no significant contribution to the business.

So to have a stop on losing precious customers each day, get your hands on this product and help grow your business immediately. Click here to know more about Abandoned Cart Pro for WooCommerce plugin.