We have discussed about abandoned carts in our last post and detailed the listings of abandoned cart in the plugin. One of the column on the listings page displayed the various cart statuses of Abandoned Cart Pro for WooCommerce plugin.

Let’s go a little more in-depth to understand the different statuses of Abandoned carts. There are typically 3 types of abandoned cart statuses stated as below:

Now let us understand the difference between these statuses.

As the name suggests, ‘Abandoned’ status implies carts that were not purchased by the customer and got abandoned after the cut-off time specified. Hence the details of this order will appear on the Abandoned Order List page with status as ‘Abandoned’ under the ‘Status of Cart‘ column as shown in the above image. 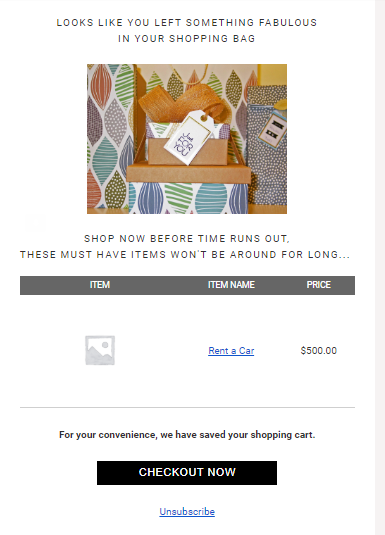 Unsubscribe link in the reminder email

So when a customer clicks on the unsubscribe link, he will not receive any future reminders for that order and the status of the abandoned order will change to Unsubscribe.

This status is related to the payment of the order. It will appear on the Abandoned Orders listing page when a customer reaches the payment gateway site but does not complete the payment and hence the cart gets abandoned. Admin needs to add setting for Hold stock (minutes) under WooCommerce -> Settings -> Products -> Inventory as shown below:

Thus the cart will be considered as Recovered cart and its complete details like customer details, cart abandoned date, cart recovery date, and time and order total will be displayed.

If the user has placed an order recently on the site and if he has abandoned another cart. Then in such a case, if the store owner does not want to send the reminder email immediately then our plugin has a setting “Send reminder emails for newly abandoned carts after X days of order placement” located at Abandoned Carts > Settings page. It allows the site admin to set the number of days after which a reminder emails should be sent for a newly abandoned cart since the last order placed by the same user. And this cart will show the status as “Abandoned – Order Received”.

Hence this part of the Abandoned Orders List page helps you to have a complete understanding of the status of all the abandoned carts so that you can take the necessary steps for inducing the lost customers to come and make potential purchases. This task is made easy and convenient by our Abandoned Cart Pro for WooCommerce plugin.

Was this article helpful to you? Yes No 1